a. Policies and objectives
The Charity exists to preserve, protect and improve the natural environment for the public benefit, in particular but not exclusively by promoting and supporting the creation and maintenance of green spaces through both example and education.
In setting objectives and planning for activities, the Trustees have given due consideration to general guidance published by the Charity Commission relating to public benefit, including the guidance ‘Public benefit: running a charity (PB2)’.

b. Strategies for achieving objectives
On the 11 March 2018 Singleton Spaces took over the running of the Singleton Environment Centre (SEC) from The Conservation Volunteers (TCV) that had leased the site from Ashford Borough Council (ABC) since 2008. During the latter part of TCV’s tenure, the Centre was slowly being run-down as it was felt that it was no longer viable within the organisation’s revised priorities. The local parish council, Great Chart with Singleton (GCSPC) sought volunteers to form a trust to run the Centre and from this endeavour, Singleton Spaces was born.

Singleton Spaces applied for charity status with the specific aims of advancing environmental protection and improvement in Singleton, the promotion of understanding and participation in the management of open spaces and the promotion of engagement in practices of good health and well-being. To these ends, the SEC would provide a hub for information and advice, provide community and schools activities (such as practical sessions and working parties) and by engaging with public, private and voluntary sector organisations with similar purposes, working in the locality.

c. Activities undertaken to achieve objectives
To finance these ambitions the trustees recognised that the Centre’s café, “Footprints” could be a significant source of revenue if it could be run as part of the Centre itself, instead of by a third-party sub-letting the space. Timing could not have been better as the previous operators were looking for a change and were pleased to transfer the business to Singleton Spaces. The transition had a successful outcome and has allowed the Centre to host many events since. We believe that Singleton Spaces has demonstrated, within two years, that prudent management would provide a long-term future for the Centre and the charitable objects.

b. Factors relevant to achieve objectives
The Centre has undertaken the following developments around the site:

On behalf of the trustees I would like to thank everyone involved in bringing the extension to fruition, particularly ABC councillor for Roman Ward, Heather Hayward who was instrumental in obtaining the funding and parish council chair, Ian McClintock. Let me also extend grateful thanks to our staff, whose dedication has earned the Centre an enviable reputation in the local community, and to the trustees, volunteers all, whose hard work guides the Centre’s environmental mission.

For most, 2020 was a very difficult year, as it was for the SEC. The forced closure of the Centre at the end of March to comply with lockdown rules meant our main source of revenue evaporated overnight. Use of the government’s Furlough Scheme enabled us to keep our staff and when the initial lockdown period ended, we were able, with all the necessary precautions in place, to re-open in July. There followed a reasonably successful summer, but just when we all thought things were starting to get a little better, along came a second wave and a second lockdown, forcing us to close again. The light on the horizon was the December transition to a “tiered” system, only to discover that Kent would be in tier three, the most restrictive, which meant our options for reopening were confined to offering just a take-away service. The trustees deliberated long and hard as to
whether this would be viable but decided to take an optimistic approach and give it a go, including the reintroduction of the take-away Sunday Carvery. This proved to be very popular but was to end up being shortlived as a new, more easily spread strain of the virus appeared and plunged us back into lockdown. As we moved into 2021 the trustees concluded that, for the time being, the Centre would remain closed, considering our commercial interests secondary to the elimination of the virus.

That paints a fairly grim view of last year, but it hasn’t been all bad.

As our major project for 2020 Singleton Spaces, working with GCSPC and ABC, was able to win significant funding to build a two-storey extension at the bottom of the site. The extension will provide a large, dividable space for classes, meetings, or small functions. Upstairs will be an education room, which will eventually offer live wildlife coverage from cameras across the site. Outside this is a sizeable viewing platform which looks out over the nearby ancient woodland and the site earmarked for a new planting of greater than 6,500 trees. We have also been able to include a proper office for the centre manager, who had previously been using a small cupboard in the main building as his office! At the time of writing, the extension is not quite finished (mainly due to delays resulting from the pandemic), but it is expected to be fully open by summer 2021.

Working with ABC, we were able to negotiate the replacement and re-siting of the car-park lighting, a much needed project to improve safety.

STATEMENT OF FINANCIAL ACTIVITIES
FOR THE YEAR ENDED 31 MARCH 2020 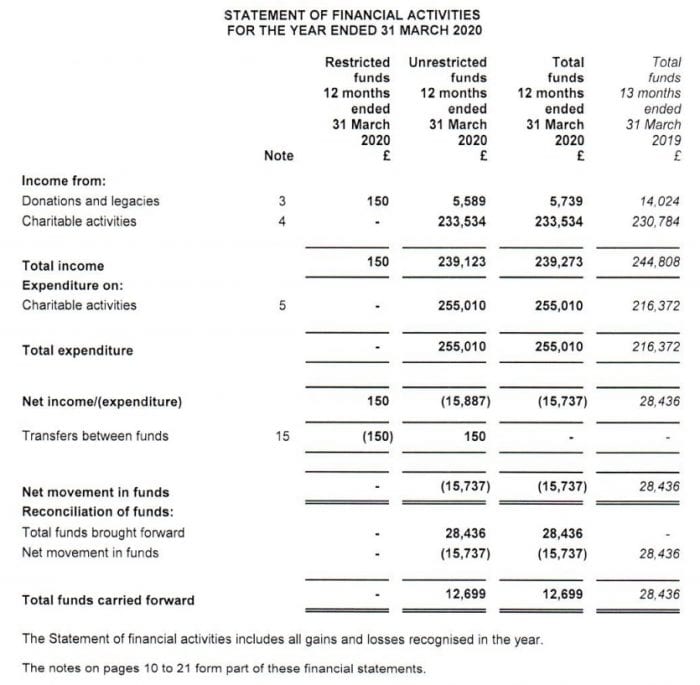 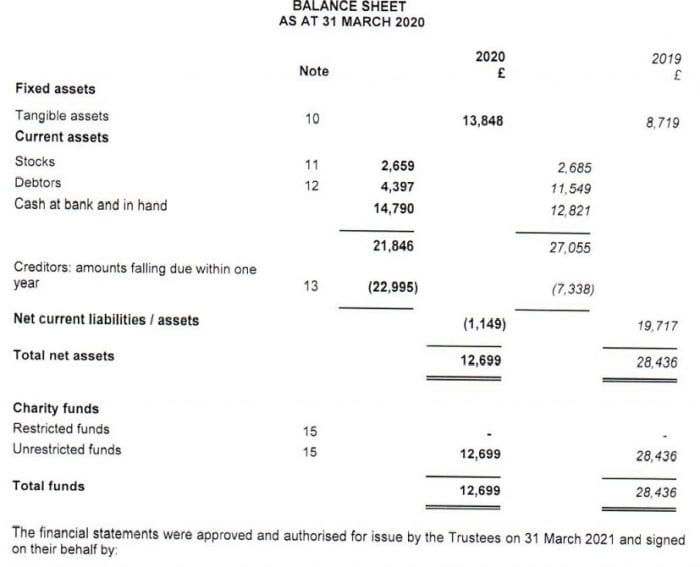 The Annual Report and Accounts (21-page PDF, 1.7Mb) may be downloaded here…

Please note this file is significantly reduced in quality for the website. For printing purposes, just email John for a better quality copy.

Return to the page about Singleton Spaces >